The Woolly-necked Stork (Ciconia Episcopus) or Bishop Stork or Indian White-necked Stork is a large bird inhabiting wetlands across South Asia and the Far East, and North Africa. I have photographed these birds in and around Delhi, and mostly after the rains in Bharatpur, Rajasthan where these birds nest.

These birds are hard to miss, given their characteristic woolly-neck that they are named for. Found in pairs and small flocks, the woolly-necked storks have a glistening green-black plumage with a black capped head, white neck and white under parts. The breast is glossy purple, red legs and a dark beak. They are also called Bishop Storks for their colors that resemble the vestments worn by the Christian clergy. 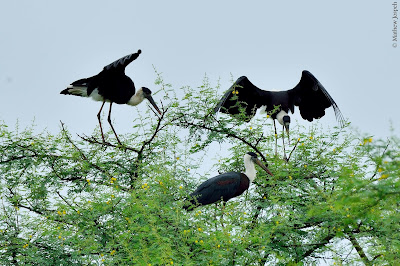 The woolly-necked storks have large wings and soar high on thermals. They fly with their necks outstretched as all storks do. They wade in shallow water and on the ground, catching their prey of fish, marine invertebrates, small amphibians, insects and even small reptiles. 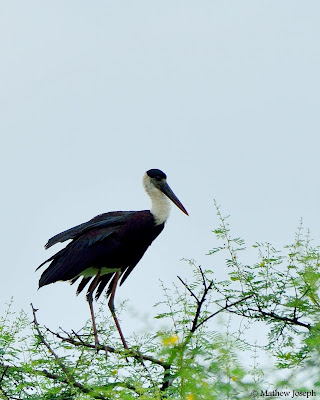 They build nests made of sticks and twigs atop trees and the female lays a clutch of two to five eggs. With growing loss of habitat and decrease in numbers, these birds have been categorized as ‘vulnerable’ by IUCN. 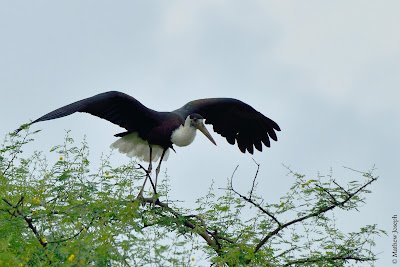 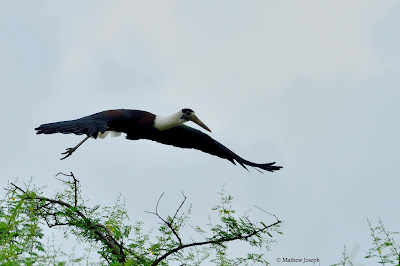 Mathew Joseph
Mathew Joseph is a bird photography enthusiast from New Delhi, India, and as a Birder without Borders, travels far and wide across continents in the pursuit of his hobby. Reach him at mathewindelhi@gmail.com